In this brief article we take a look at the long-term trend in household consumption, and its apparent change in direction of travel of the last few years. The graph shows the long-term trend in average per capita consumption since 1960. The data points up until about 1992 are taken from Herrington's report on household demand from the mid-90s. Since 1992, PCC data has been reported annually by Ofwat and the Environment Agency and more lately through www.discoverwater.co.uk. 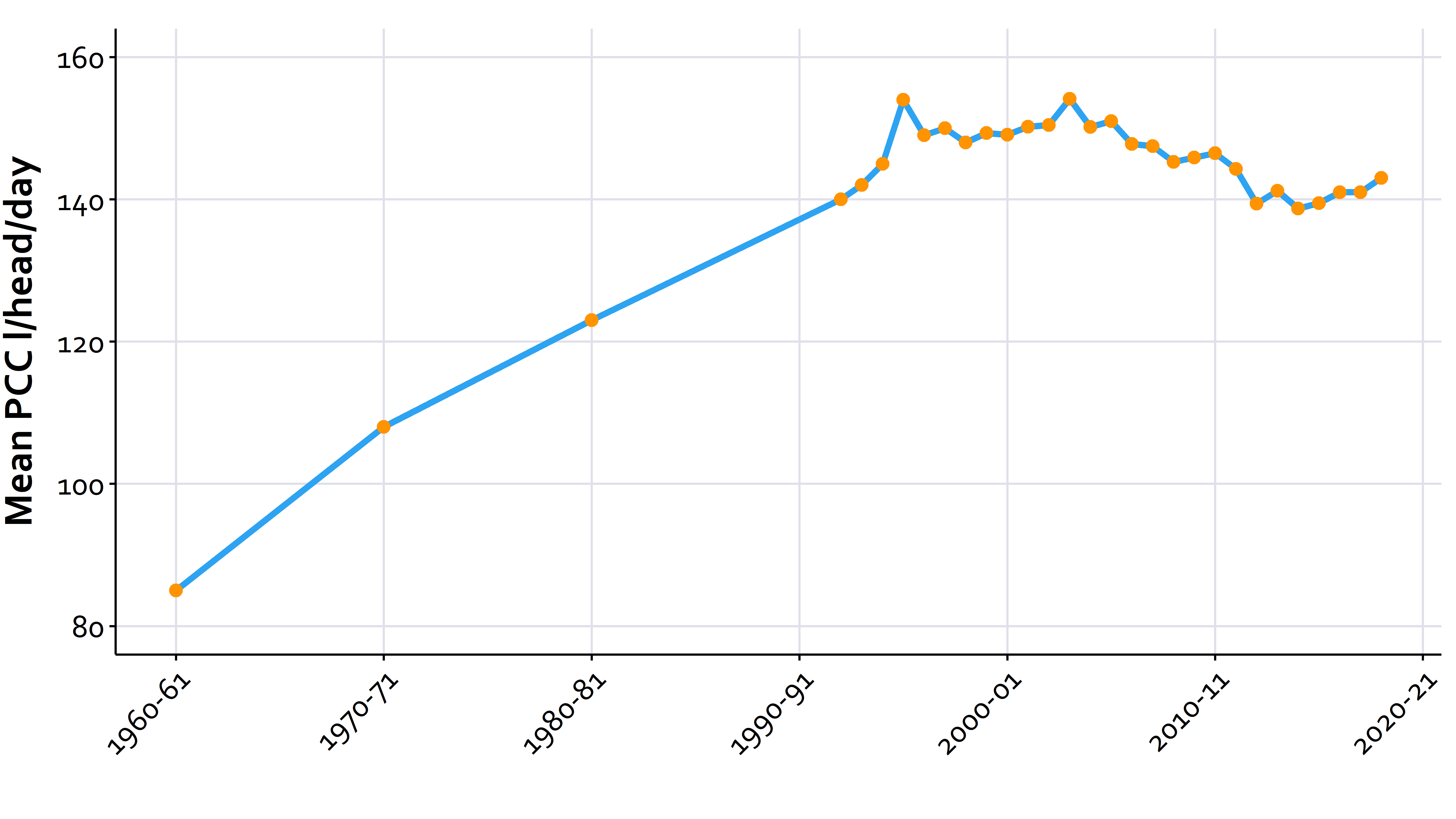 Household consumption rose steadily from the 1980s due to changes in water practices, such as the change from weekly bathing to daily showering. PCC peaked in 1995/96, largely due to the hot dry summer of 1995. Consumption then flattened off, with a further peak during the hot dry summer of 2003, after which PCC steadily fell until around 2012/13 (which was also the wettest summer in recent history). This trend can be attributed to the steady increase in metering since the mid-90s, along with a growing focus on water efficiency, coincidentally (or not!) since Waterwise was founded in 2005.

The increase in reported average PCC since 2014/15 is interesting. We know that household consumption is driven by factors including property type, water fittings present, occupants, socio-demographic factors, values towards water use, whether the household pays via a meter, and weather. The increasing trend in PCC over the last five years could be due to a number of these factors. For example, 4 out of the last 6 years have been relatively warm and dry, since 2000 there has been an increase in the number of WCs fitted in homes that have the propensity to leak, since 2012 the UK has been coming out of the infamous 2008 recession, and there has been a rapid increase in house building, which may result in changes in occupancy.

Understanding these trends is important if we are to develop clear strategies for water efficiency. Recently Artesia has been looking at how we can use sub-daily data to:

Doing data science working from home is challenging: here is what we have learnt...

Study reveals how water use has changed in lockdown...

An innovative social science research project with the University of Manchester...

The exceptionally hot and dry summer of 2018 revealed some fascinating insights...

New Waterwise article! The effect of the coronavirus lockdown on water use

Incorporating Artesia's eVader software as a module into iNet...

A few brief words in memory of SGW...

Another article for Waterwise

Artesia continues to update plans in response to Covid-19...

Reviewing long-term patterns in water use...

An exciting new partnership between Artesia and Waterwise...

Rob's back at Westminster!

Appearing before the EFRA Select Committee...

The 2018 Enterprise Applications of the R Language conference...

Artesia in the national news

Rob Lawson seems to be getting everywhere...

Dene gets innovative in a big tent...

Artesia celebrates a decade of consultancy and data science services...

Evidence of our expertise